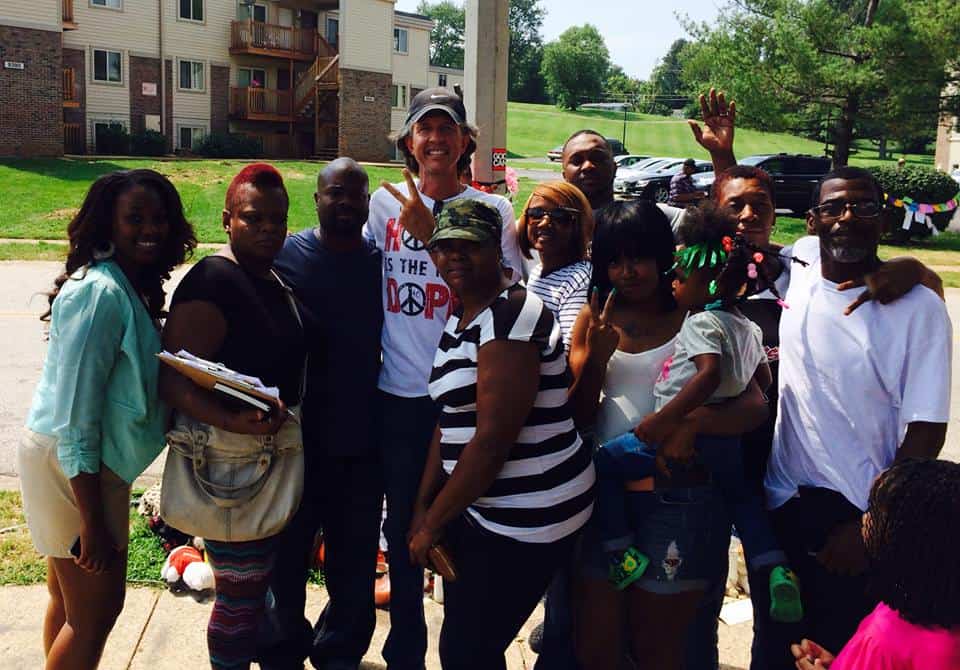 People keep telling me that this is not a good idea, that it would be dangerous. They told me the timing wasn’t good, and that my type would not be accepted there in that place, especially not now, with all that was going on. But I felt like now was the exact time to go; any other time would make no sense. This was the right time, and this was the right place; and these were the exact people that I needed to go and meet, and the exact people that I needed to learn from. How would I know if I do not go? The nation has been in an uproar over the killing of a young black man named Michael Brown by a white officer named Darren Wilson in Ferguson, Missouri, just outside of East St. Louis. The country rioted over the Rodney King beating in Los Angeles almost twenty five years ago, and then our nation was divided once again by the killing of Trayvon Martin in Florida just a few years ago. Now this latest tragedy, along with the Eric Garner case in New York closely following it, has exposed an ugly reality in our country that not much has changed, and that the racial divide is as deep as it’s ever been. Everyone has an opinion and everyone is choosing sides, and most are not afraid to broadcast that opinion, though many know very little about that which they are arguing. They only believe what they have watched, read or listened to in the media, but they have not gone and seen for themselves. I think if you haven’t walked a mile in the other’s shoes then it is better to listen and learn rather than preach. I have been guilty of that many times before.

So after I finished a series of events in a Kansas prison, I drove across the state line and headed for Ferguson. I didn’t have much of a plan but I felt a strong call pulling me. I’ve heard that voice many times before and simply followed it, and that has made all the difference. So I listened, and I drove. There had been recent protests and even riots in that community, where businesses were burned, looted and destroyed. It had gotten so bad at one point that the National Guard was called in and tear gas was used to disperse the angry crowds. I began to drive through St. Louis and on to Ferguson trying to find the exact spot where the killing had taken place just a few weeks earlier. The whole country was on edge over a grand jury decision as to whether they would charge the officer in the killing. I could sense the tension as I got deeper into the community. But I couldn’t find the street because I didn’t know where I was going. How would I know if I didn’t find someone to ask? So I saw a young man and a young woman sitting on a grass bank waiting on a bus. I pulled over and got out of my car. As I approached them they quickly noticed that I was not from around there. The young man happened to be black, and so was she. He had some fascinating artwork on his face and was wearing a Miami cap turned up and to the side. I asked a few short, but very important questions.

“I need your advice,” I replied.

I went on. “I would like to get your opinion about something. I’d like to know what you believe the solution to this big mess is. I need to know from someone who lives here.”

The whole vibe and energy of the situation quickly turned. Here I was, a white man that was obviously from out of town, walking around by myself asking questions to complete strangers in a neighborhood that was on the brink. He seemed to sense that I wasn’t a cop, or a reporter, but perhaps just a friend. I politely approached, I called him sir, I asked for his help, and then I wanted his opinion; treating him as an authority. They were wonderful and offered a very articulate and reasonable opinion. Then I asked how I could find the place that I was looking for.

“Yeah, I guess that is what I’m looking for.”

He directed me, with a little grin, and then I gave him a street-hug. I said “I got nothing but love for you man.” And he said “I love you too, sir.” I got back in my car and headed to the hot spot.

As I drove down the street that had seen the rioting just days before, it looked like a war zone. Row after row of store fronts were boarded up, and the QuikTrip was burned to the ground, as well as other businesses all the way down that road. I stood in front of the stores and talked to people as they came out. I asked a young man where Michael Brown’s apartments were, and he pointed up the street, “Just head that way, you’ll see it.” I walked on and eventually came to the spot. There was a make shift memorial with flowers, teddy bears, balloons, candles and other loving gestures piled up in the street. There were also signs that had been propped up that read “Stop Killing Us” and other heart-broken messages. It was eerily quiet and deserted, and then slowly people began to come out and walk up to me. There I was, all alone wearing my “Hope is the New Dope” tee-shirt and walking around the site and saying hello to anyone that approached me. I offered the same questions that had already worked: “Excuse me, can you help me? I need some advice and your opinion. What do you believe that the solution is here?” It was like magic. Before I knew it there was a small crowd around me and I was interviewing people. By the end of my visit to that tragic landmark, we were hugging and posing for group photos, with peace signs in the air— at the exact spot where Michael had been killed. Whatever your position is on that controversy, it’s hard to argue with love. That picture (above) is a prized possession, and it reminds me that people are just people, and these were just heart broken, hurting families. They were beautiful and they treated me with nothing but love and respect. I wonder who would have predicted any of that by just watching the news… I wonder.