Peace Behind the Wire: Psycho Under the Stairs 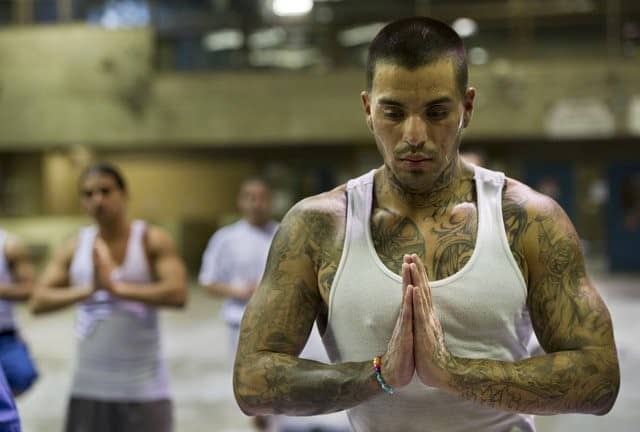 I am standing under a dark stairway, and out of sight from anyone else in our group. A man stands uncomfortably close, so close that I can smell his breath. His head is shaved, and there are tattoos on his face. His eyes shift back and forth and his body moves uncomfortably. He has been in this place for a long time and he will not leave during his natural life. He goes by the name of “Psycho” and he lives in an eight by ten foot cell in a place that those in the free world rarely see. He has asked if he can talk to me, because he has an important question to ask. This is the first time we have officially met, and we are on his turf. This is Alabama’s death row. Twenty two men currently live there and they have all received the law’s most severe consequence: they will live out the rest of their lives there, and they will all die one day by lethal injection. He tells me that he is indeed guilty of the crimes that he has been convicted of and that he deserves what he has coming to him— an admission which is somewhat rare in this place. I have spent several hours this afternoon with this misfit band of brothers, and on this day they will memorialize a close friend that they have all lost just the week before. This is my first trip to “the row” though I have made a number of trips since that unforgettable Saturday afternoon. His eyes begin to moisten and tears fall over his teardrop tattoos. His voice quivers as he begins to ask the question. I turn to the right to see if anyone else can still see us, which they cannot. My eyes turn back to him and into his deep stare.

“I have a question for you, preacher” Psycho says in a hushed tone.

“I want to get right with Him before they take me, and this is what I need to know: can your God save a man like me?” Tears fill his eyes.

That question digs deep into my heart. Here was a man that the world hates, fears, and that many have forgotten, though some never will, waiting on a phone call that he hopes will never come. He is asking me the age old question that so many have asked before. How do I get past what I have done, the choices that I have made, and the way that I have lived my life? My life’s work has become all about how to help people answer that question, and find a way to change. To make amends, heal broken relationships, find meaning and purpose in their lives—and make things right, for themselves and to this wounded world. This random but powerful interaction caused a shift inside of me and got me thinking about solutions.